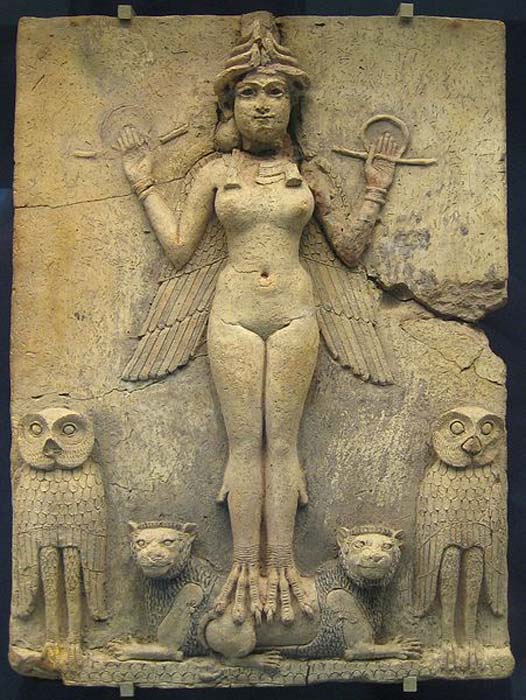 The very first author whose name we have on record was a woman.

The very first author whose name we have on record was a woman. And she’s been compared to Shakespeare.

Rectangular, baked clay relief panel known as the Burney Relief or the Queen of the Night. ( Public Domain ) There is debate whether this relief depicts Inanna Ishtar, Lilitu, or Ereshkigal.

Her name was Enheduanna (?????) and she lived from 2285 to 2250 BCE. Enheduanna was installed as High Priestess of Ur (now in Iraq) by her empire-building father Sargon 1, King of Akkad. So she was a political appointee.

Her mission was to merge the gods of the Akkadians with the gods of the Sumerians so that the city of Ur would accept Sargon’s rule. (And this is after Sargon forced them to switch from their native tongue to Sumarian.)

How to make the conquered accept their overlords? Combine two deities into a single, all-powerful goddess called Inanna. She wrote about her (and to her) in 42 poems that have survived more than 4,000 years.

Inanna is chest-thumpingly fierce and awe-inspiring,as suits a God who presides over sex and war. At one point, Inanna kills An, the chief Mesopotamian God, and becomes the leader of the gods herself.

when she speaks heaven shakes

“Like a dragon you cast venom upon the enemy land.

Asnan no longer exists because of you

Flooding waters surge down on such an enemy land

You are the supreme one in Heaven and Earth,

you are their Inana!”

(from “The Exaltation of Inanna” )

Her poetry is not all propagandist. Forced into exile from her temple, Enheduanna writes wrenchinly:

“By day, the sun scorches me,

By night, the shade overwhelms me,

My honey-sweet voice has become strident,

Whatever gave me pleasure has turned into dust.”

Some experts describe the political nature of her writing in a scolding tone.

Anyone who thinks that poets are floaty type creatures who live above the earthly plane has never met a poet! They live, like all of us, within worldly constraints.

Something has been created

As the Royal Astronomical Society points out, Enheduanna was a woman in S.T.E.M. Her position as High Priestess required making accurate mathematical and astronomical predictions. She observed and tracked the Moon to calculate the Lunar calendar, while keeping a record of the seasons and the Sun.

Scholar William W. Hallo explains that she was a personality “who set standards in all three of her roles for many succeeding centuries…”

Shockingly to we moderns,  she was the very first author to write in the first person. Enheduanna knew she was creating something unique. You can feel her exhalation when she writes:

‘The compiler of the tablets was En-hedu-ana. My king, something has been created that no one has created before.’

Her work went on to inspire the prayers and psalms of the Hebrew Bible and the Homeric hymns of Greece, and through them the far-distant hymns of the early Christian Church.