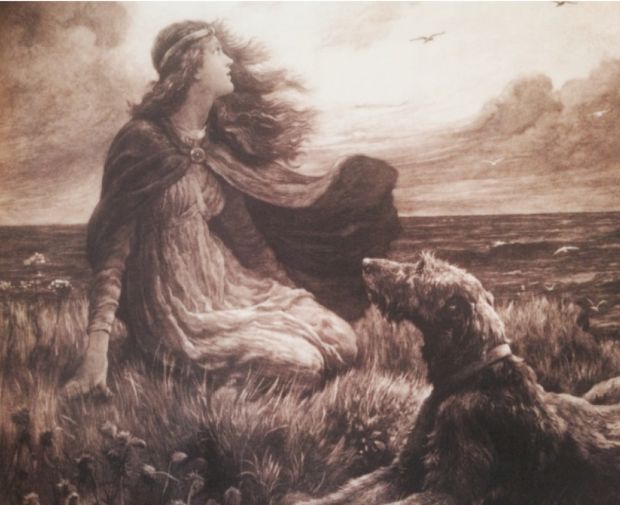 Ancient Celtic dogs are in stories and proverbs, protected in laws, and even used to name other animals. 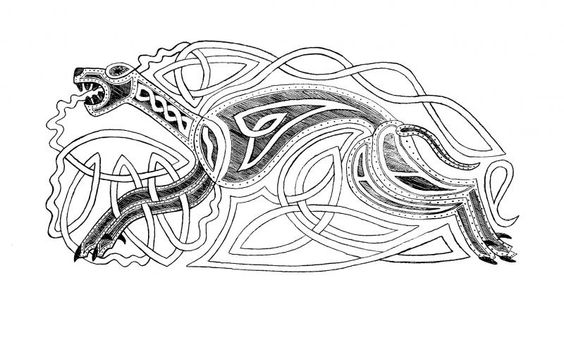 There are nine breeds of dog that are native to Ireland: four terriers, three gun dogs, and two hounds. At least one, the Irish Water Spaniel, legendarily descended from the dobhar-chu-a Celtic spirit.

Cú Chulainn is the legendary figure from Irish mythology who arrived late to a party.

He offered to take up the dog’s duties and so became known as Cú Chulainn – the hound of Chulainn (his host).

The Celtic Brehon laws endowed many animals with the same rights as humans:

“It is illegal to override a horse, force a weakened ox to do excessive work, or threaten an animal with angry vehemence which breaks bones”

On the other hand, an animal that killed someone was hanged as quickly as a human!

If a chicken left droppings in the kitchen, its feeding trough might be covered. Mitigating circumstances were taken into effect. If a cat attacked a member of the family in pursuit of its mousing duties, it was exempt from liability.

A large portion of one of the Brehon law tracts is taken up with the law relating to dog fights and injuries to people attempting to promote or stop them.

If you rented land in Gaelic Ireland you were likely to find that your lease obliged you to keep wolfhounds and to engage in regular wolf hunts on your landlord’s behalf.

The laws reference compensation you were obliged to pay for any damage done by your tame wolf. The fact that the laws bother mentioning this suggests that wolves may have been quite common pets at the time!

An entire tract of Brehon Law is entitled “Bee judgments.”

Sugar being very rare and expensive, honey was used to sweeten food, and beeswax was needed for candles.

The ancient Law on bees stated that any bumble bee taking nectar from plants on a neighbour’s land could be accused of grazing trespass in the same way a cow or sheep would be.

The wandering bees were allowed free reign for three years but on the fourth year the hive’s first swarm had to be given to the neighbour as payment.

Yet another law covered bee stings. As long the person stung had not retaliated by killing the bee, he or she would be entitled to a free meal of honey.

If, however, the person died from the sting, two hives were paid in compensation to their family.

Folklorists tell us that bees were easily offended and had to be treated as part of the family. In the event of a family death, their hive must be trimmed with black ribbon and funeral food shared with them.

We may call dogs doggos, puppers, pupperinos, and fluffers. The Celts went further, according to Darach Ó Séaghdha – they named many Irish mammals a “something-dog”.

“Madra” being the Irish word for dog, a fox becomes a madra rua (red dog) a squirrel is madra crainn (tree dog) and even the seal is named madra mara (sea dog).

Dogs borked and boofed their way into Irish proverbs too.

“Ag cur madraí i bhfuinneoga” is an expression for duping someone. It literally means “putting dogs in windows”.

Someone running in a clumsy manner  is doing the “rith madra an dá cháis” (the run of the dog with two cheeses).

In Brehon Law if a person’s dog pooped on their neighbour’s property, the owner would have to clean the mess up and provide their neighbour with an amount of butter, dough or curds equal in weight to the offending deposit.

Maybe we should bring this one back?

For more information on the quirks of the Irish language and Ireland, try the brilliant “Motherfoclóir: Dispatches from a not so dead language”