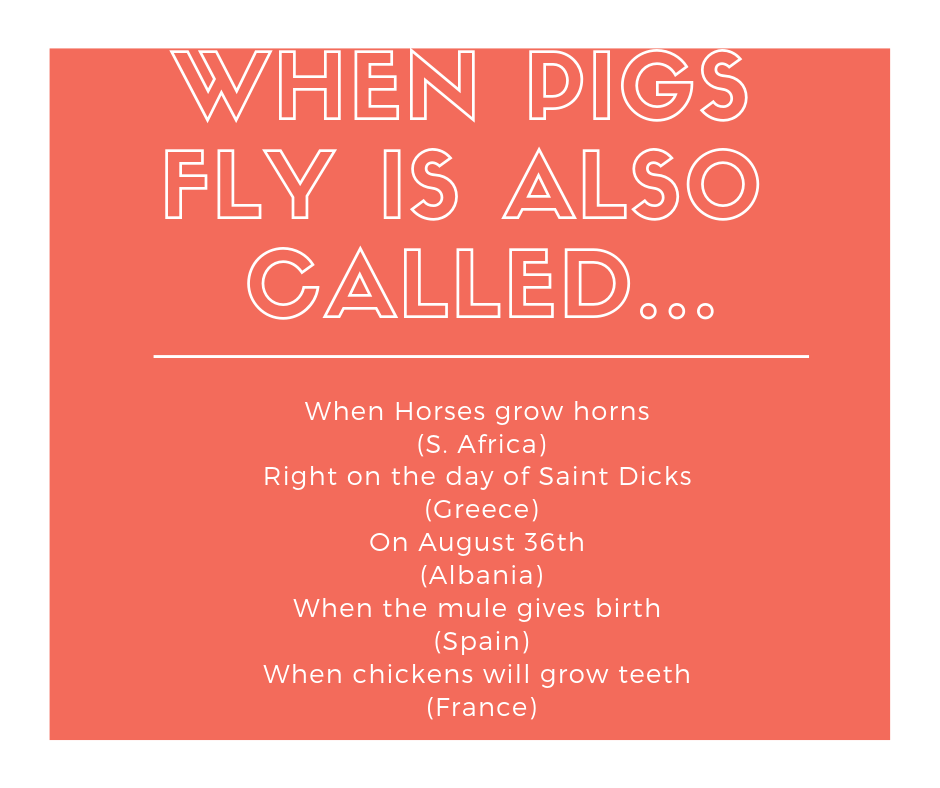 You probably know the phrase “Pigs Might Fly” or “When Pigs Fly”. Today I discovered that the world of sarky disbelief is rife with toothy chickens, mustachioed frogs, and coughing cows.

We can trace the phrase “Pigs Might Fly”back to the 17th century when mutton was mutton and pigs few “in the air with their tails forward”. Not only are these pigs airborne, they are flying backwards. (And in heels?)

“Saint Never”, a seemingly delinquent, or at least absent, Saint is often name-checked to express doubt.

Portugal: “On the afternoon of the day of St. Never”

Slovenia: “On the feast of saint Never”

Poland:  On the Saint Dygdy’s Day, who is never around.

When Chicken have teeth is a French and Afrikaans alternative to “Pigs might fly”. Bizarrely, chicken actually can grow teeth. They have all the genes to grow them but they’re inactive. You can stimulate the genes in chicken embryos. If you have a yen hen to do so.

In Ancient Greece, “breeding griffons with horses” was as patently ridiculous as a flying pig.  Ancient Rome had “on the Greek kalends,” The Romans split up the month by giving some days special names; the Greeks did not. A bit more abstract than “Pigs Might Fly”, but probably hilarious to an Ancient Roman.

An estimated 150 or so German phrases contain some reference to swine. While the Germans don’t have an equivalent of “when pigs fly,” they do say “I think my pig is whistling” (Ich glaub’ mein Schwein pfeift).

Here are some countries hogging all the fun, with their hilarious alternatives to “Pigs Might Fly”.

Kerala (southern India): “when the hen grows a pair of nipples” and ” when the crow (a bird) starts flying upside down”.

Cambodia: “khadol douk die” – when my dick grows a hand.

Danish: when there are two Thursdays in one week

Brazil: “Nem que a vaca tussa” – not even if the cow coughs

Belgium : the week with 4 Thursdays.

Fun fact: during WW2, people used to say that Brazil would only take part on the war when “a snake smokes”. When Brazilian troops were sent to help hunt down Benito Mussolini this was on their uniforms.