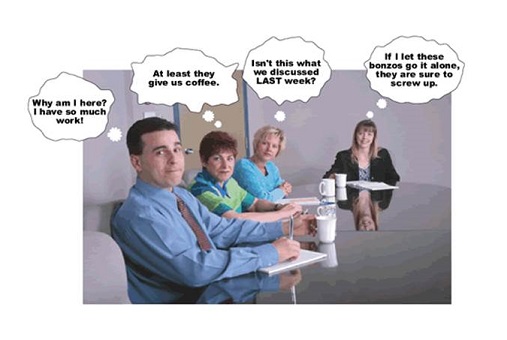 Why am I here? The true cost of bad meetings

The bane of many lives. As the saying goes:  minutes are kept in meetings but hours are lost.

Workers on average waste 61% of their time coordinating their work in meetings, email, and chat rather than actually doing their work.

In a survey of 182 senior managers in a range of industries: 65% said meetings keep them from completing their own work. 71% said meetings are unproductive and inefficient. 64% said meetings come at the expense of deep thinking. 62% said meetings miss opportunities to bring the team closer together.

Why are so many meetings mediocre, boring and soul-destroying?  And why so many in the first place?

The Psychology behind Bad Meetings

One psychological explanation of bad meetings is that people know how to run a successful meeting. They just don’t do it.

The “passenger” is what Al Pittampalli calls the collective psychological forces that prevent us from doing our work. The Greeks may not have binged on Netflix, but they still had a word for procrastination : akasria or “weakness of will”. Author Stephen Pressfield named it the Resistance, “the most toxic force on the planet.”

The passenger was vital to our ancient survival. Focusing on rewards that could be achieved immediately gave us an evolutionary advantage.

The 4 drives – fighting, feeding, fleeing, and mating- aren’t so useful when our goal is to write a book, make our first thousand sales, or build a company.

Unlike procrastinating with Netflix, Facebook, or Instagram, make-work feels like real work. The passenger easily tempts us onto the hamster wheel of dubious or bad meetings.

Psychology Today lists 2 traps that we fall into with meetings:

To silence your inner passenger, try asking before the meeting:

All it took for a team of the best and brightest to fall apart was …..nutella.

In an test on astronauts, they were given a limited amount to Nutella to last them the entire “trip”.

One member of the group, however, ate more than their share — and refused to own up.

The nutella incident caused an almost irreparable rift in the group, seriously blocking collaboration and teamwork throughout the project.

So how can we ordinary mortals manage to collaborate?

“Meetings should be like salt — a spice sprinkled carefully to enhance a dish, not poured recklessly over every forkful. Too much salt destroys a dish. Too many meetings destroy morale and motivation.” — Jason Fried

What started as a task manager is now a sort of virtual conference room for teams, where they coordinate tasks, due dates, comments, and priorities.

More and more companies are hiring freelance and contract workers. Gallup reports that 43% of employed Americans already do some work remotely.

InVision, a 750-person software company where every employee works remotely, takes video conferencing to the extreme.

CEO Clark Valberg uses video conferencing to communicate even if the other person is in the same room.

“Getting together in-person doesn’t scale,” he says. “We get together to fortify our personal relationships, build rapport, and create intimacy… but real work happens online.”

Most offices still aren’t set up properly for remote work. Tinny voices, weird camera angles, signal dropping…we’ve all been there.

If everyone is on video call, remote workers are no longer the ghost in the machine.

So you’re on a conference call. Write off the first few minutes, which is going to be spent on checking who can see what and struggling with the mute/unmute button.

Then someone arrives late and you have to start all over again.

(Best to mute your reaction at that stage).

Gustavo Razzetti suggests trimming meetings to 15, 25, 45, and (rarely) 55 minutes.  When time is limited, people tend to get more done.

He points out that quick catch-ups, simple decisions, updates, or launching a new initiative can be achieved in 25 minutes.

The late arrival problem? Simply block 15 minutes in between meetings. This provides time for preparation, short break, or just moving from one conference room to another.

In a 2009 study, a team of psychological scientists gave 22 employees at a German bank “sociometric badges” designed to measure their levels of productivity, job satisfaction, and group interactions.

By comparing information from the badges, self-reports, and emails, they found that the more total communication (email and face-to-face) a person engaged in, the lower they rated their level of job happiness.

That may be because schedules riddled with meetings interrupt “deep work”. The term describes the ability to focus without distraction on a cognitively demanding task. Deep work, where you push your brain and your existing skills to their limit, is where you produce real value.

If we accept that meetings should involve problem solving, decision or substantial debate, not to share routine or non-urgent information, then we will have more satisfied workers – and fewer bad meetings.