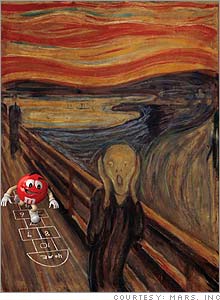 Mars once offered a reward of 2 million dark chocolate M&M’s for the return of the recently stolen painting “The Scream”. 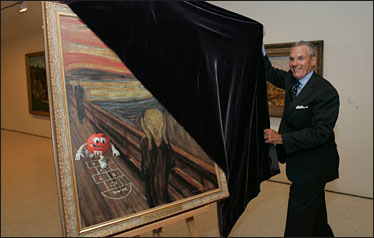 The offer was tied to the launch of an 2006 ad campaign for Dark M&M’s.

As the slogan says – ‘dark just got fun’.

Just days after the campaign, the painting was found by Norwegian police.

The Scream and Madonna may been stolen to distract police from another investigation, one into a murdered Norwegian police officer.

Startled museum visitors watched them walk up to The Scream (#4), pull the artwork off the wall, then flee grabbing another Munch painting, Madonna, on their way out of the building.

They may have even dropped the paintings on the way.

If the robbery was a joke, the security was a scream.

French radio producer Francois Castang, who was visiting the museum when the crime occurred, stated “All you had to do is pull on the painting hard for the cord to break loose, which is what I saw one of the thieves doing.”

Candy to Scream For

A prisoner, David Tosca, already serving 20 years for armed robbery, bartered the location of “The Scream” for conjugal rights and -perhaps – 2 Million M&M candies. Spread over 20 years, not a bad haul…

The Scream could be worth as much as $100 million, not bad for an artwork once dubbed the result of the artist dipping his finger in excrement and smearing it around.

Did 2 million M&M’s ever get to Norway?

Neither the police nor the prisoner got their hands on the m&ms. Instead the value (approx. 140,000 Norwegian kroner or about $26,000) went to the Munch Museum.