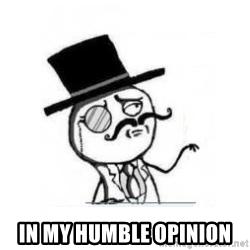 Why IMHO is a word, not an acronym

In the internet debate on whether the H in IMHO stands for Honest or Humble, I go with neither.

Believe it or not, there’s a poll on Buzzfeed right now and honest is leading humble at about a 60-40 split.

Honestly, I have to humbly side with The Atlantic on this one.

“We all know what IMHO means. It is a set of letters that can introduce friendly advice, a stern caesura, or a joke. In other words, IMHO is a word.

It joins the many other initialisms that have been ratified into ordinary words: snafu, radar, laser, zip code.”

Like the phrases “to be honest” and “to tell the truth”, it marks an attitude or point of view.

Here are some acronyms that have been promoted to words:

There are words so old we have simply forgotten they were acronyms to begin with.

The word “fad” may originally have come from “for a day”, while “ok” may have been borrowed from “orl korrect”.

Here’s a point for the pro-Humble people.

The less-popular variation “IMNSHO”, meaning “In My Not So Humble Opinion”, simply wouldn’t work if the “H” meant “honest”.

Nobody would ever say “In my not so honest opinion”.

That would give the game away, surely.

On the other hand “In My Not So Humble Opinion” sounds kind of …arrogant.

Unless it’s about the magic of words, in which case fire away.

“Words are, in my not-so-humble opinion, our most inexhaustible source of magic. Capable of both inflicting injury, and remedying it.”

— Harry Potter and the Deathly Hallows

If you enjoyed this piece, maybe read on to find out why calling someone a smart aleck isn’t such a good idea.