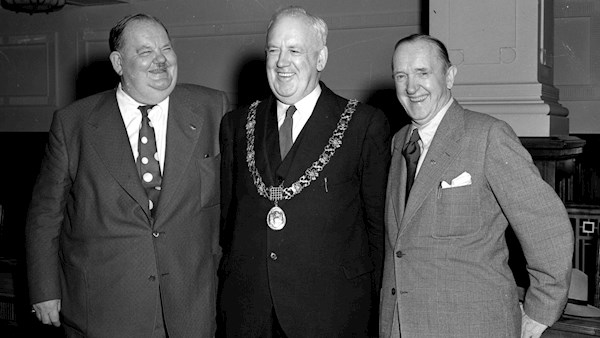 When Laurel and Hardy landed in Ireland, it was a beautiful mess

The Big Apple hardly noticed laurel and Hardy leaving but, by God, Cobh noticed them arriving.

“The thought that our favourite film comedians might be a stone’s throw away down town while we scholars sat in our classrooms was more than any human beings could be asked to endure. “

There was no advance press, but somehow everyone knew that Laurel and Hardy were landing.

The Christian brothers had no choice but to let them go:

“Alright, you can go down to see them.”

The cathedral played the Laurel and Hardy theme

The two film stars were stunned by the people’s sheer joy and often spoke of that Wednesday, September 9 1953:

“The docks were swarming with many hundreds of people. ‘It’s strange, a strange thing,’ Stan says in recalling that day, ‘our popularity has lasted so long. Our last good pictures were made in the thirties, and you’d think people would forget, but they don’t. The love and affection we found that day at Cobh was simply unbelievable. There were hundreds of boats blowing whistles and mobs and mobs of people screaming on the docks. We just couldn’t understand what it was all about. And then something happened that I can never forget. All the church bells in Cobh started to ring out our theme song, and Babe looked at me, and we cried. Maybe people loved us and our pictures because we put so much love in them. I don’t know. I’ll never forget that day. Never”.

The young Gebruers’ father played the Laurel and Hardy theme, the “Dance of the Cuckoos”.

Gebruers describes his befuddlement that Stan was the composed one, thanking his father for “playing the bells” (actually the carillon). Shouldn’t he be the distraught one, Gebruers thought, wringing his hands and bawling crying as Olie yet again admonishes: “That’s another fine mess you’ve gotten us into.” In fact, the reverse was true.

For the uninitiated (i.e almost everyone), the carillon is an instrument with bells on. Old carillonneur joke:

Does my name ring a bell?

No, but as any veteran carillonneur will tell you – their hands and feet do.

For this tour, Stan wrote a new sketch “Birds of A Feather”. In this sketch, Stan and Laurel get jobs as whiskey tasters. “The more we drink, the more we earn,” suggests Stan. They get so drunk that Ollie tries to fly like a bird and Stan believes him. Both wind up in a  sanitarium as guinea pigs for a crazy doctors’ experiments.

Hardy, who was now over 350 pounds, suffered a heart attack on the UK trip. Laurel and Hardy would never tour again.

One thing that the two comics never knew : the British press created a huge uproar because they played their profane music on the sacred church bells, and, above all because Laurel had been married more than once – maybe as many as seven times! Dr Gebruers, the carillon player, nearly lost his job.