This is how you market a tiny ginger Scottish drink

Irn Bru is the world’s most popular soft drink (that isn’t Coca-Cola).

Irn Bru showed its true-blue Scottishness by tweeting a cheeky graphic of the global dominance of Coca-Cola.

Scotland was the only country where Coca-Cola isn't number one spot for beverage sales. Click To Tweet

One (very Scottish) explanation is that :

Irn-bru uses a colouring called ‘sunset yellow’ that is banned in the US because excessive consumption is too hardcore for normal people outside Scotland.

Feel free to take the rest of the map with a dash of Irn-Bru.

Coca-Cola company doesn’t operate in either North Korea, Cuba or the middle of the Caspian Sea.

Who cares, when Irn-Bru produces hilarious ads from their take on the classic Christmas movie The Snowman to the more recent Pigs Can Fly.

When the world was told IRN-BRU Xtra has no sugar but still tastes amazing, the world tended to respond:

‘Aye and pigs will fly’.

XTRA made a pig fly! But let’s hear about it from the horse’s…er…pig’s
mouth. IRN-BRU XTRA. No sugar, tastes amazing. #Unbelievablestuff pic.twitter.com/mZbNGLLsJr

Because they can’t get Irn-Bru stains out of the carpets!

Still Game star Greg Hemphill revealed the ban during a visit to the hotel in Largs, Ayrshire. 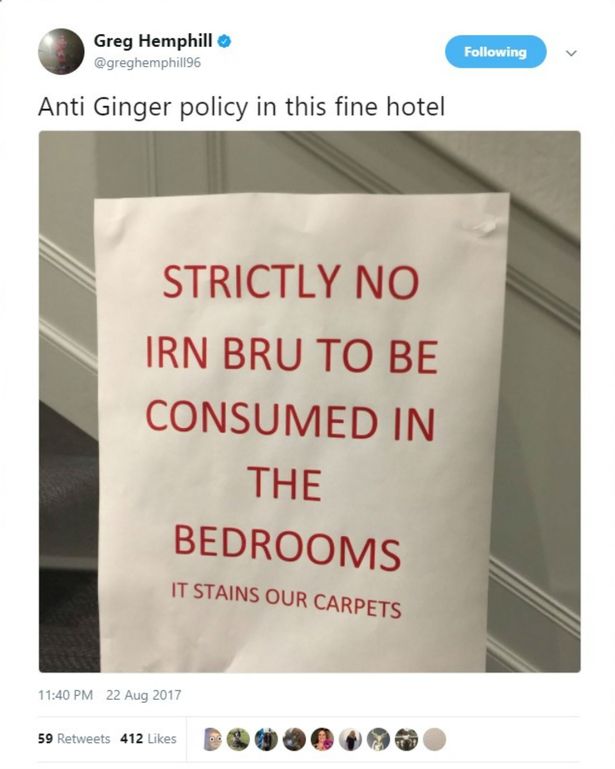 A member of staff at Brisbane House Hotel responded to Hemphill’s tweet by saying:

“We have had to get industrial cleaners out – it’s the worst thing to get out of the carpets.”

Asked if they had banned the drink  from rooms, she added: “I will not confirm or deny.”

But one fan agreed with the hotel’s policy. He said:

“In fairness, I saw it destroy a carpet once and immediately worried about what it was doing to me.”

Interestingly, an advertising campaign with the tagline “Made in Scotland, from girders” was banned in the US, as Irn Bru is not actually made from girders.

Outside the U.K., you can get Irn Bru on Amazon, imported food shops, international aisles and, strangely, all over Russia.