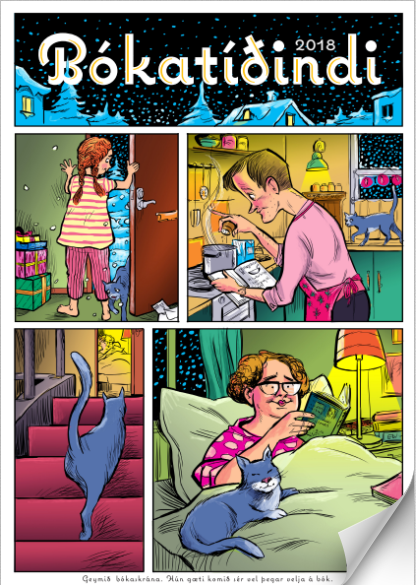 In Iceland, you exchange books on Christmas Eve and spend the rest of the night reading. Preferably in bed. With chocolates.

This cosy tradition is known as “Jólabókaflóðið:” the annual Christmas Book Flood.

The two big mail days in Iceland are 1. when the Ikea catalogue arrives and 2. the bókatíðindi.

A copy of the bókatíðindi, or book catalogue, is mailed free of charge in November to every Icelandic household.

90% of Iceland’s books are published during the Christmas season, flooding the bookshops.

Books became increasingly popular as Christmas presents, instilling an even strong culture of reading and writing.

According to a Nordic publishers report, in 2012 there were 3.5 published titles for every 1,000 of the country’s inhabitants — double that of Finland, Sweden, Norway and Denmark.

This island nation of just over 300,000 people has more writers, more books published and more books read, per head, than anywhere else in the world.

Icelanders produced the Sagas and the Poetic Edda, written down almost a millennium ago and inspiring countless writers, include J.R.R. Tolkien.

They’ve had a near universal literacy rate since at least the 18th century.

“The conversation turned upon scientific matters, and M. Fridriksson asked my uncle what he thought of the public library.

“Library, sir?” cried my uncle; “it appears to me a collection of useless odd volumes, and a beggarly amount of empty shelves.”

“What!” cried M. Fridriksson; “why, we have eight thousand volumes of most rare and valuable works—some in the Scandinavian language, besides all the new publications from Copenhagen.”

“Eight thousand volumes, my dear sir—why, where are they?” cried my uncle.

“Scattered over the country, Professor Hardwigg. We are very studious, my dear sir, though we do live in Iceland. Every farmer, every laborer, every fisherman can both read and write—and we think that books instead of being locked up in cupboards, far from the sight of students, should be distributed as widely as possible. The books of our library are therefore passed from hand to hand without returning to the library shelves perhaps for years.”

A book in his stomach

There is a story that Icelanders like to tell – that every Icelander wants to write a book.

There’s even  is a phrase in Icelandic, “ad ganga med bok I maganum”, everyone gives birth to a book.

Literally, everyone “has a book in their stomach”!

According to the BBC, 1 in 10 Icelanders will publish that book.

If you enjoyed reading this, you might like the story of the man who spent 20 years copying e-books by hand.